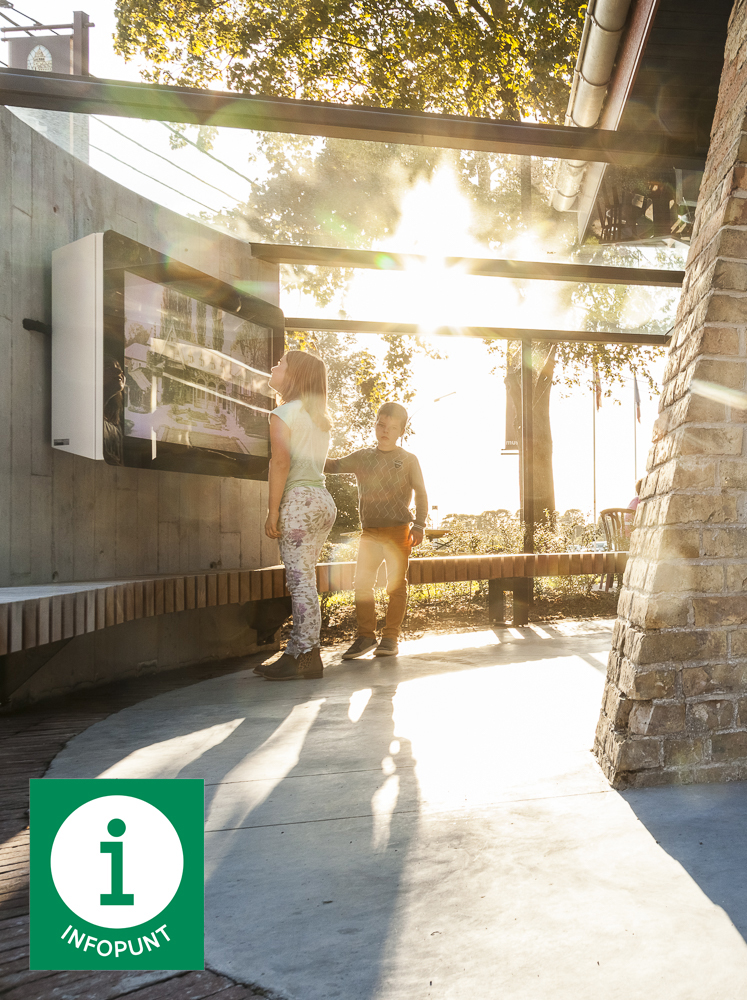 Hooge Crater is an official information point of Tourism Westhoek. Here you can always consult the latest tourist brochures, ask the staff for information or buy walking and cycling maps.

You can easily combine a visit to the museum with sites in the area. The following sites and attractions are within walking distance or less than ten minutes' drive.

Directly opposite the museum is the fourth largest Commonwealth military cemetery in Europe with 5.923 graves. The Stone of Remembrance stands in a circular depth symbolising the numerous (partly disappeared) mine craters in the area, such as Hooge Crater.

On this spot, some tough battles took place within the domain of 'Hooghe Château', now a hotel. On the domain, two bunkers and some craters can be visited.

A little further behind the museum is a small wood with 16 craters. It is about five minutes’ walk from the museum and can be reached by a low-traffic path. The Liverpool Scottish, a unit of the British Army, fought hard on and around the Hooge on 16 June 1915. This action, in defence of the Ypres Salient, was not entirely successful and almost resulted in the unit's decimation. There is now a memorial plaque.

A little further there is the R.E. Grave in Railway Wood. This is a British military cemetery with casualties from the First World War. The Cross of Sacrifice marks the spot where 1 officer and 11 men of the 177th Tunnelling Company (Royal Engineers) were killed in the underground warfare between November 1915 and August 1917. There are no gravestones, but their names and regiments are engraved on the base of the Cross of Sacrifice.

The Menin Gate is a memorial in the town of Ypres and is a five-minute drive from the Museum. The town gate was built by the British in 1927 on the eastern side of the town to commemorate 54.896 British soldiers who died in World War I and were neither identified nor found. The Last Post is played here every evening at eight o'clock by a group of clarion players.

With its 11.956 graves, this is the largest Commonwealth cemetery in the world. This silent witness to the Battle of Passchendaele is a ten-minutes' drive from the museum. A visitor's centre in the Vijfwegenstraat, near the car park, gives more information on the cemetery itself and offers a panoramic view of the 1917 battlefields.

A visit to our museum can be combined with the Bellewaerde amusement park or aqua park. Both parks are a five-minute walk from the museum. Prices and practical information can be found on their website (https://www.bellewaerde.be)

Be sure to check out the websites of other tourist companies in the area to complete your visit to Hooge with an overnight stay or a weekend away.

Do you like peace and quiet, nature, and the Westhoek region? With 9 bedrooms and sufficient sanitary facilities you are in the right place for a weekend break with family or friends! The holiday home can accommodate up to 18 people.

Barak de Vinck is a holiday home with a special story. Here you strip yourself of all luxury and live in the rhythm of nature, just like one hundred years ago. Far away from the hustle and bustle and all modern comforts, you experience the essence: you come to rest and make time for each other. The holiday home can accommodate 4 people.

Right behind the museum there is room for 8 campers. You can spend the night with your campervan on spacious pitches. Wi-Fi, service point, breakfast service, camera surveillance, 10A electricity connection... Everything has been thought of. The beautiful view of the Ypres Salient comes on top of all this!

Just outside the city of Ypres, in an oasis of greenery, you will find hotel Kasteelhof 't Hooghe. It is situated 3 km from the centre of Ypres. Away from the hustle and bustle of the city, it is an ideal place to relax and explore the region.

At 't Hof Bellewaerde you can camp and stay. The 3.3 hectare domain is located at the end of a dead-end street right next to the Crater forest and offers many possibilities in addition to tranquillity and a splendid view.